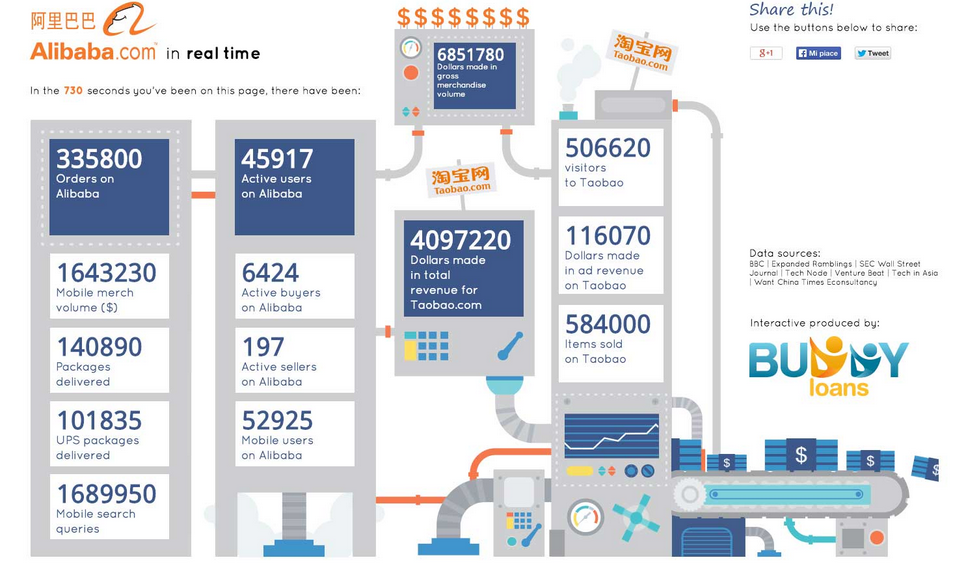 Just a few years ago shopping online was very much a niche activity. In 2014 however, it has become a common activity around the globe and increasing numbers of businesses are taking full advantage of this trend.

One of the biggest Asian e-commerce markets is China, where more than 340 million consumers regularly shop online and spent an estimated $265 billion in 2013.

Alibaba; the Chinese internet extraordinaire is one of the most prominent e-commerce players in the market today. They are one of the companies that have made huge profit, year on year due to their e-commerce sales.

The Chinese e-commerce giant changed the way online shopping was perceived by bringing together both buyers and sellers on one interface to exchange goods.

It’s been predicted that China’s e-commerce total will overtake the US by 2015 or even sooner. An infographic by Buddy Loans clearly demonstrates the huge volumes of traffic and transactions currently going through Alibaba, the world’s largest e-commerce company, in real-time. It is clear that within one second the business makes $9,360 and in five minutes can make nearly three billion dollars.

Alibaba are looking forward to offering promotions for the 11th of November; last year they made $1.6 billion in just one day due to their promotions and offers. This year they are hoping to increase this and top rival Amazon.

The entire world is watching the Chinese e-commerce business to measure their success in the next quarter to predict the Chinese market as a whole.

Alibaba currently accounts for 80% of China’s online sales and as the numbers continue to increase, Buddy Loans’ real-time infographic could become a vital resource. The numbers are constantly updated to represent the current state of affairs with active users, active buyers, active sellers, mobile users, items sold and dollars made all recorded for viewers to see. You can even track the number of orders placed and the mobile merch volume in $.

The UK is another important market for online retailers. The smaller population may make it a smaller market overall in comparison to both China and the US, but in 2013 Britons spent more online per person than consumers from other countries.

Nearly three-quarters of British consumers (73%) buy goods for delivery via the internet at least once a month, while nearly one in four (24%) do so every week.

According to the Office for National Statistics (ONS), clothes were the most popular items bought on the internet this year, with 64% of 25 to 34 year olds having bought clothes online.

Price and ease of shopping appear to be the reasons behind the rise in global e-commerce.