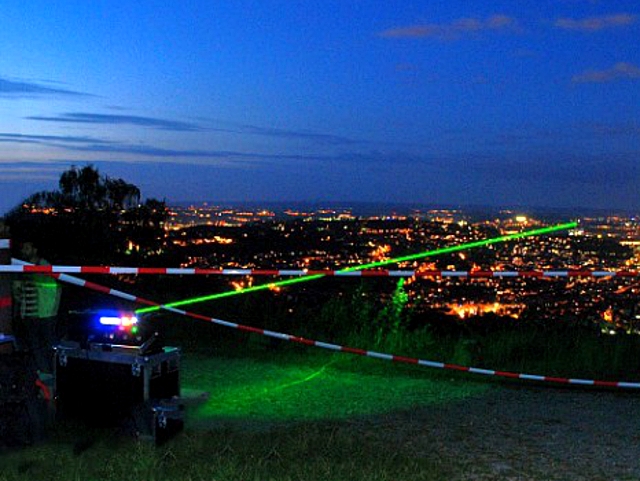 Anova, a US based company which specializes in low latency networks for stock trading is nearing its completion on ultra high speed laser network between NYSE – New York Stock Exchange and the NASDAQ data centers in Mahwah and Carteret, New Jersey. High frequency trading – HTC, the source of making thousands of stock trades per minute is now going to get a boost that will further enhance the trading activity.

Anova is utilizing equipment which has been provided by AOptix, an American company, contracted by the US military producing identical laser based systems for ground to aircraft communication and each AOptix base station has the potential of carrier grade availability equivalent to 99.999% over a distance of 10 kilometers or 6.2 miles.

The link speed according to AOptix would probably be around 2Gbps though not exactly massive in terms by fiber optic standards but will be quite sufficient for a few thousand trades per second. The link in other words is a few nanoseconds faster than the prevailing microwave and fiber optic links though in terms of world of HFT or high frequency trading, nanoseconds would lead to millions of dollars by way of profits for trading companies which is the unbelievable potential of HFT in creating money out of nothing.

The accurate latency improvement of NYSE-NASDAQ laser network is still unknown though over a distance of thirty five miles in terms of nanoseconds, with a microwave system presently in place, a straight line distance of around 800 miles between Chicago and NYC, has the latency of around 4.13 milliseconds. By scaling it down to thirty five miles, you arrive at a latency of 0.18 milliseconds between the NYSE and NASDAQ.

This could be of great advantage that the difference of even a few nanoseconds would help to bring in high frequency trading and boost their profits, instead of using older, slower network.

According to Anova, there are a number of trading firms waiting to use the new laser network which could help them to enhance their trading experience besides the gains. Moreover, laser network has the advantage of microwave/millimeter wave network, higher bandwidth with some amazing adoptive optic which are not affected by bad weather.